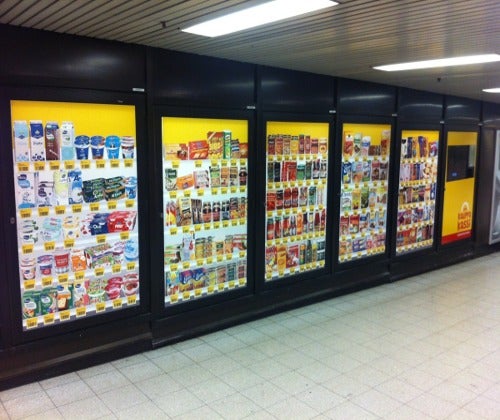 Finnish startup Digital Foodie and Helsinki Co-operative Society Elanto of S Group have joined forces to turn the walls of some of the busiest commuter locations in Helsinki into virtual stores.

Recently, the walls came to life with virtual displays of a selection of products with barcodes, which shoppers can scan using Foodie.fm on their smartphones to buy.

North America’s consumer industry saw a drop of 30.52% in deal activity during April 2022

"Now with the virtual stores, Foodie.fm users can order food while waiting for the metro or tram for example," Koutajoki added.

"S Group has been running personalised online store with Foodie’s technology for a while now and the new virtual store is a natural extension to their service."

The virtual store displays product assortment from S Group’s grocery chain Alepa, which operates in the Helsinki area with over 80 neighbourhood stores.

Scandinavian retail chain S Group has presence in Finland with a 45.2% market share.

Foodie.fm, a multi-platform service designed by Digital Foodie, already has over 220,000 users in Finland.

In addition, Foodie contains a fully integrated social community that enables S Group’s customers to find ideas, and transparent information about the food they eat.

In the UK, Foodie.fm runs independently and the product assortment is linked to Tesco through the Tesco API, enabling the community a direct checkout with Tesco.com.

Topics in this article: featured