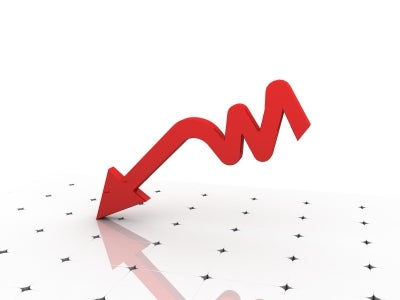 Greece’s retail sales by volume declined 13.5% year-on-year in April 2012, after falling 16.2% in March and 12.9% in February, according to the data released by Hellenic Statistical Authority (ELSTAT).

The volume of retail trade, excluding automotive fuel, decreased 14% in April 2012, when compared to the corresponding month in 2011.

Retail sales by revenue decreased 11.6% in April after a revised 15.2% fall in the previous month, on an annual basis.

The non-food recorded the highest year-on-year decline in sales volume, down 17.9% in April.

Automotive fuel sector recorded 11.6% fall in sales volume in April, while food sector registered a 10.7% decrease in the month, on an annual basis.

Among the specialised store categories, highest year-on-year decrease in April was recorded by clothing and footwear, which saw a 27.2% drop in sales volume.

Sales volume in food, beverages & tobacco edged down 20.5% in April, while pharmaceutical products and cosmetics sales volume fell 12.9% in the month, on an annual basis.

On an annual basis, sales volume in department stores, supermarkets and automotive fuel decline 6.7%, 8.8% and 11.6%, respectively, in the month.

During the same month, food sector moved up 10.1% and non-food sector advanced 6.5%, on a monthly basis.

Among the specialised store categories, highest month-on-month growth in April was registered by clothing and footwear, which grew 20.9% in sales volume.

Image: Retail sales in Greece both by volume and revenue decreased in April from the same month last year. Photo: FreeDigitalPhotos.net

Hypermarkets, Supermarkets and Hard-Discounters in Greece: Market Snapshot to 2017