UK department store chain Debenhams has made deals with landlords to open the majority of its outlets after the Covid-19 coronavirus lockdown is lifted.

Debenhams plans to reopen 120 outlets with seven confirmed for permanent closure. The remainder of the company’s stores are still at possible risk.

Understanding the background to the deal

In March, Debenhams asked landlords for a five-month rent holiday due to the Covid-19 coronavirus pandemic. This followed the government ordering non-essential retailers to close for the duration of the UK lockdown.

The retailer then filed for administration at the start of April for the second time in two years. Debenhams described this administration period as a “light touch move” to protect it from legal actions from creditors.

While the Covid-19 coronavirus pandemic is a large factor in Debenhams’ downfall, there is also evidence that UK high streets have seen a prominent drop in consumers due to changing consumer habits and a shift in the retail landscape.

According to the British Retail Consortium (BRC), total UK retail sales in 2019 fell by 0.1% and was the worst year on record since the consortium began monitoring the retail sector in 1995.

BRC chief executive Helen Dickinson said: “2019 was the worst year on record and the first year to show an overall decline in retail sales.”

As well as the decline in the high-street, the BBC stated that Debenhams “fell into the hands of its lenders” in April 2019 and has since faced debt and rising costs to keep stores running.

Response to the deal

In March, one of Debenhams’ landlords told the BBC: “They’re asking us to accept a deal on rent and service charge based on a percentage of the turnover but, in reality, what they’re offering would only just cover the service charge and a little bit of the rent.”

Another landlord said: “This is not a bully boy tactic by Debenhams, it’s done out of desperation to save the business.”

Last week, Debenhams chief executive Stefaan Vansteenkiste said: “I’m delighted with the progress we are making with our landlord discussions, which reflects the pragmatic view the vast majority of them are taking of the current market conditions.

“Regrettably we have been unable to reach agreement on seven stores and these will not be reopening, and I’d like to express my thanks to our colleagues in these stores at what I know is a difficult time for everyone.”

The stores confirmed for permanent closure are based in Leamington Spa, Salisbury, South Shields, Stratford-upon-Avon, Truro, Warrington and Westfield in West London. These closures will impact 442 jobs.

However, according to news source Drapers, Debenhams’ administrators have denied this.

The administrators said: “The joint administrators and management team of Debenhams are in discussion with landlords in an effort to agree terms that reflect that stores are currently unable to trade due to the social distancing measures announced in response to the Covid-19 pandemic. These discussions have been largely positive and are on-going.”

Debenhams in decline: before Covid-19 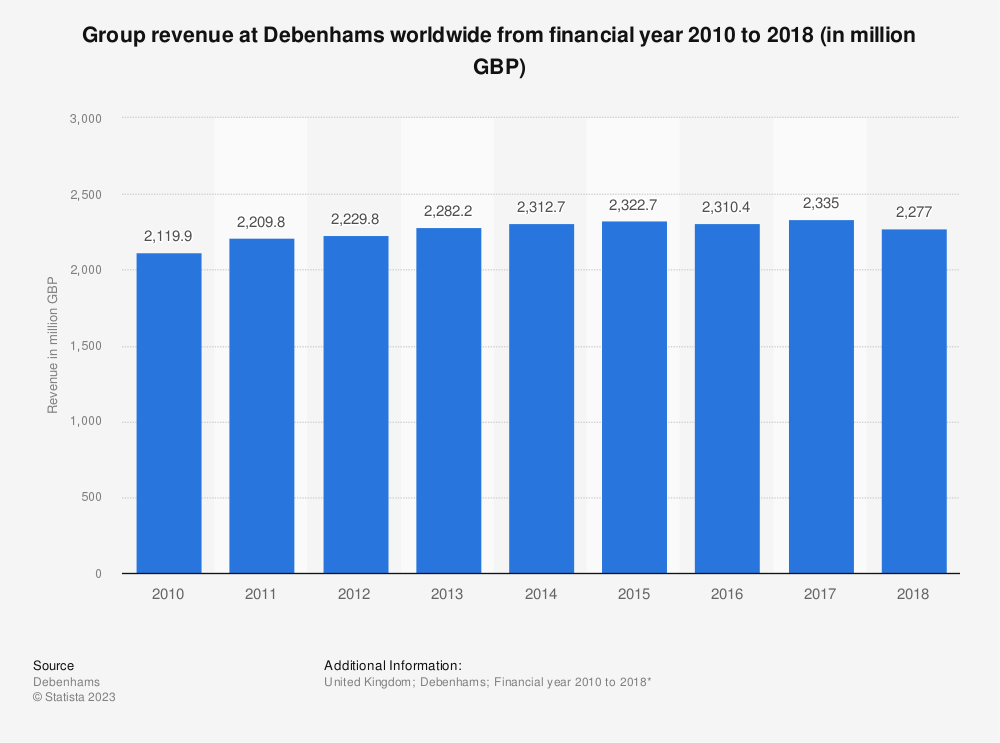 Debenhams’ annual revenue stagnated at around £2.2m in 2018. The retailer then went into administration in April 2019 after rejecting Sports Direct’s proposed bid of £61.4m for the company.

At the beginning of March this year, Debenhams began searching for a new chief executive following the closure of its legal challenge with Sports Direct to help tackle £600m in debt. The Guardian reported that at least £100m of this debt would be converted to equity.